Walking down Hay Street Mall, a visitor to Perth city could be forgiven for momentarily wondering if they had travelled through time, not just to a new place.

While most of the street-level tenancies present nothing out of the ordinary, other than a typical modern retail fitout, a gaze to the upper floors reveals a different story. The facades of these buildings – at least 100 years old – represent the few remaining remnants of Perth’s history. They also capture a street fabric somewhat different to today – of theatres, grand hotels, tenements and businesses now considered redundant with the advent of technology.

Once bustling with life, most of these spaces have sat vacant for decades, some for 40 years or more. That vacancy was rejected in a 2019 report, undertaken by independent property group Y Research and commissioned by the City of Perth, which found 42 per cent of vacant space (16,606 square metres) located in two to three-storey buildings in and around the CBD’s core was located above ground level.

This was largely driven by Hay Street Mall’s upper floors. Those dormant spaces have since created a mix of complexities for renewal; from navigating outdated building codes, asbestos and water damage to addressing accessibility issues. But city property owner Les Wilson is hopeful those challenges can soon be overcome. Mr Wilson’s ties with Hay Street Mall stretch back to the 1950s, when his family opened a fabric shop, and he has since been involved with various properties along the strip, including as part owner in 637-641 Hay Street, constructed in the late 1800s and formerly known as the Theatre Royal and Metropole Hotel. Mr Wilson said the upper levels of that space had fallen into disuse after its last tenant, Hoyts cinema, moved out in the 1980s. And like many other Hay Street Mall building owners, finding the money to meet 21st-century building codes and standards was the biggest roadblock.

“It just needs a bit of capital to help it along and it could really make a difference,” Mr Wilson told Business News. “That could come with government incentives, local council grants … there are also some well known philanthropic funds in Western Australia that hopefully might be able to assist.” Mr Wilson said COVID had prompted a renewed attention to the spaces. “We’ve got to break it down into short, medium and long-term objectives,” he said. Long term, Mr Wilson said there were opportunities for the Metropole Hotel’s upper floors to return to accommodation, or New York-styled apartments. 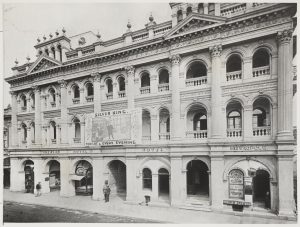 Challenges
Lease Equity Managing Director Jim Tsagalis manages several buildings along Hay Street Mall. “The cost of refurbishing the premises to make them leasable – that’s the first hurdle,” Mr Tsagalis told Business News. “The second hurdle is the cost of making them disability access compliant.” Mr Tsagalis said the third hurdle of enabling access created issues with rent – creating entrances to upper floors would require taking space out of the ground floor. The overall cost to connect both floors, he said, could potentially outweigh the rental value of the upper floors.

“Even a 60 to 80-sqm area downstairs is more valuable than what you’re going to get upstairs,” he said. “There wouldn’t be a landlord that wouldn’t want to see their property activated upstairs, even if you get close to a break-even scenario. “But those prohibitors, they don’t go away overnight.

“There’s been a definite positive view from landowners to make it happen … it’s about how do you make it happen and what do you need?” Mr Tsagalis said providing grants was one solution that had come to the fore during COVID-19, in the form of state and federal government land and house stimulus packages, and suggested a similar stimulus could be applied to these buildings.